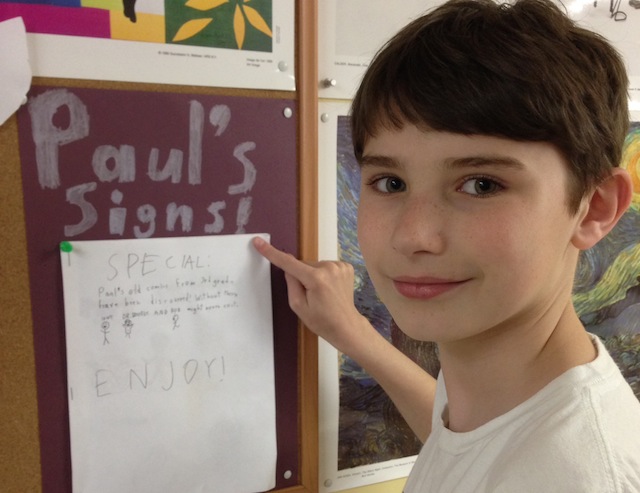 Paul, a McGuffey fifth grader, has been creating signs in the art room since the beginning of the year. I recently interviewed him and would like to share our conversation.

Ingrid: Paul, do you remember how we started Paul’s Signs?

Paul: I do. I have been drawing little drawings at McGuffey for a long time. I think I have been making comics since first grade. You didn’t like people taping things to the wall, and that’s how Paul’s Signs was born. 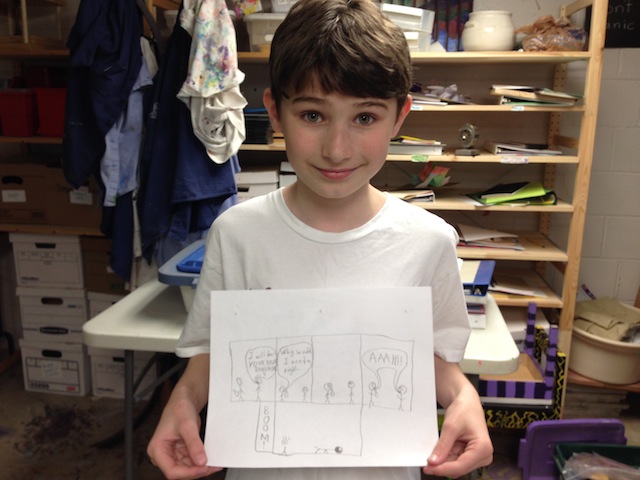 Ingrid: I remember telling the class I didn’t want them to tape whatever they wanted on the wall, then you immediately taped something on the wall. When I looked at the sign it said “No taping things to the wall.” That’s when I decided I should give you a designated spot for your humorous signs and comics. It was a good compromise. Did you have to have to make adjustments so your comics were appropriate for all audiences at school?

Paul: Yes, I have had to abandon some ideas because the jokes were too obscure for some littler kids. 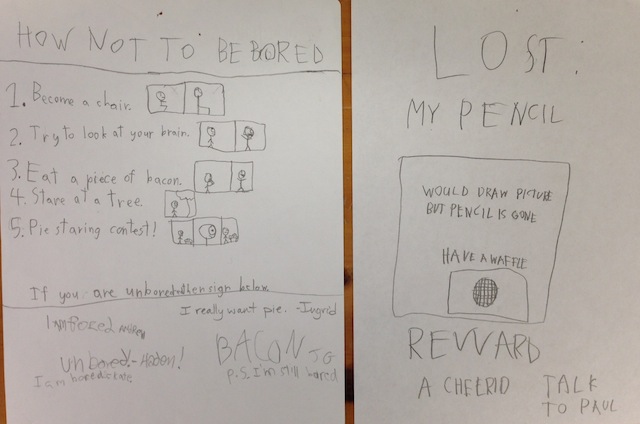 Ingrid: How did kids react to your signs being on the bulletin board?

Paul: At first I think people were jealous but then I made them more interactive and it helped.

Ingrid: I recall people asking earlier in the year if they could put things on the bulletin board and I said it was fine as long as they asked first, and it was appropriate for school. But after a while it seemed like people just looked forward to your interactive signs. So, what are some of your favorite comics?

Paul: I read them in the newspaper at home and my favorites are Speed Bump and Pearls Before Swine. 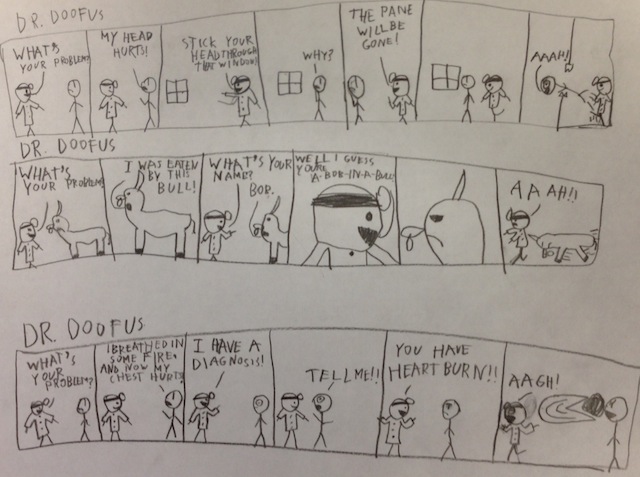 Ingrid: What was your most successful interactive comic and what was your biggest failure?

Paul: My biggest failure was the one called If Others Made Signs. I tried to show what I thought signs would be like from other people in the class but it turned out my interpretations were offensive to some people. My most successful sign was when I fixed that one and let each person draw on the sign themselves.

Ingrid: I have learned similar lessons. It sounds like you handled the failure well and came up with a great solution. Where will your comics go from here?

Paul: I will keep making comics. It makes me feel good not only to make the jokes, but to know they make other people laugh.

This entry was posted in art, McGuffey, Upper Elementary. Bookmark the permalink.